The two-minute happiness hack that will stop catastrophic thinking 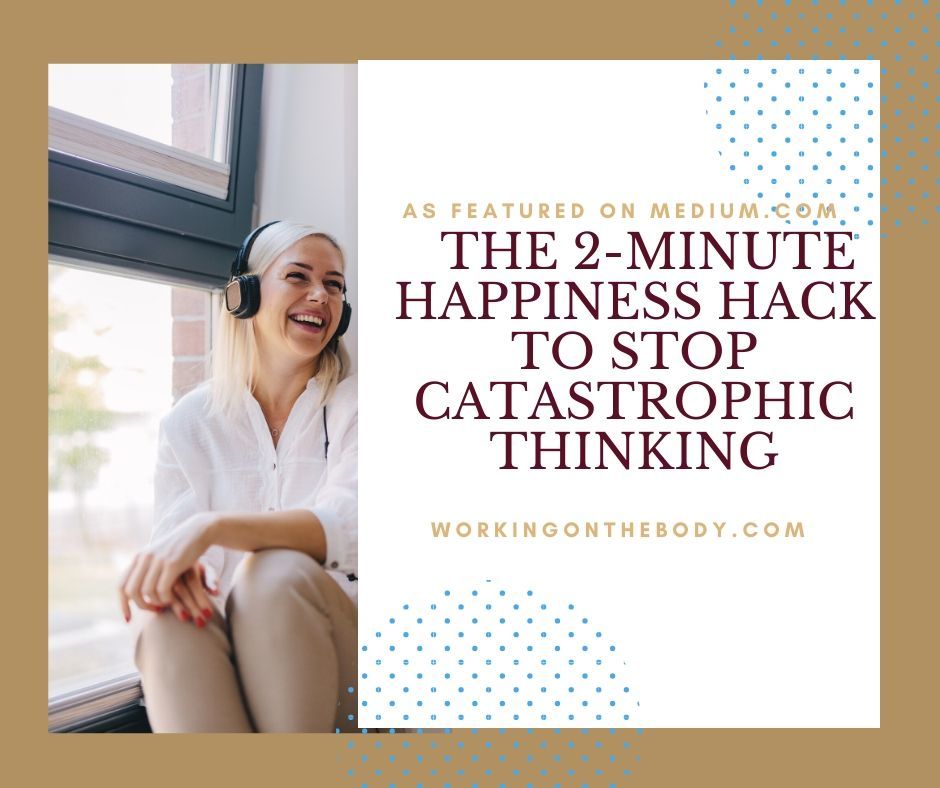 This post was also selected by Medium’s curators for their mental health category.

Therapist Sally Baker explains how this simple trick can stop negative thinking in its tracks.

People get caught up in unhelpful ways of thinking.

One of them is called catastrophic thinking. That’s when a negative thought pops into your head about something that’s way outside of your control. It’s something that may not ever happen, but you can’t stop thinking about it.

People can have these thoughts about anything, but these ‘worst-case scenarios’ are often dark and negative. Catastrophic. It’s as though you allow your imagination to imagine an ever-worsening series of ‘What if?’ until you are completely absorbed in your own nightmare version of day-dreaming.

It’s imperative to acknowledge that catastrophic thinking is something you do to yourself and not something that happens to you. It is a symptom of disordered thinking, and this technique I’m going to share with you is about taking back control of your thoughts. Because that’s all they are. Just thoughts.

It’s as though you allow your imagination to imagine an ever-worsening series of ‘What if?’ until you are completely absorbed in your own nightmare version of day-dreaming.

So when you find yourself in a deep state of catastrophic thinking, remind yourself, ‘That’s one of those thoughts I scare myself with’. Interrupt the thought pattern.

The most successful way to interrupt these thoughts is by physically moving.

If you’re sitting down then get up. If you’ve got a little more privacy then stand up. Go on!

This is called Cross-Crawl, a body energy technique which is effective in breaking the hold this unhelpful thinking can have on you. It might feel a bit silly to do at first — hence the need for privacy — but the good thing is that you’ll often end up smiling as a result, and you’ll have forgotten whatever was on your mind.

One of the reasons for unhappiness is the inner voice in your mind that runs a constant, unwanted commentary on everything you say or do. This is commonly known as the Inner Critic. If you’re asking yourself ‘What voice in my head is she talking about?”

Well, that’s the one I mean.

It’s time to turn that carping, moaning voice into your best friend and most enthusiastic cheerleader.

It usually exists just below your conscious awareness and rarely has anything constructive or supportive to say. It’s like a constant drip, drip, drip of toxic judgments. It can slowly eat away at your self-esteem and your ability to be happy.

Up until now, your inner voice has had free rein of your subconscious mind and now it’s time to turn that carping, moaning voice into your best friend and most enthusiastic cheerleader.

Sit quietly for a few moments and tune in to the voice in your head. Really hear the sort of things it says to you. Try to work out if the judgements your inner voice say to remind you of anything anyone said to you as you were growing up. You might have an ‘a-ha’ moment when you realise exactly how long you’ve been carrying these old judgements around as how unhelpful they are.

The process of replacing negative judgments with positive affirmations works best when it becomes a habit. Psychologists have worked out that it takes 21 repetitions to embed a new habit so just set aside 10 minutes a day for three weeks until your mind is used to supporting and cheering you on instead of putting you down.

If you find yourself struggling with catastrophic thinking or other unhelpful thinking styles then you can book an obligation free discovery call on this page to find out how you can think and feel differently about yourself.

The secret challenge of Christmas gifts