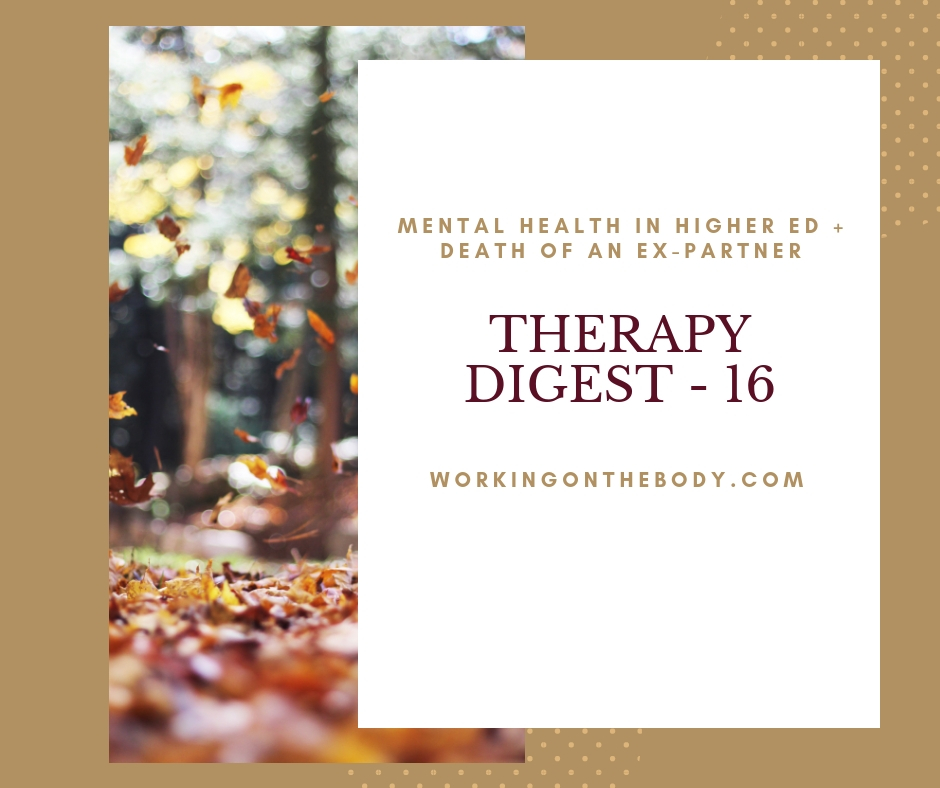 In the latest edition of Therapy Digest Therapist Sally Baker looks at how students in the US are taking legal action against their Colleges for failure to support their mental well-being. She looks at how the UK compares. Plus how the death of an ex-partner or previous spouse can prove to be disruptive to your current relation even when you’re happy and content with the life you currently have. 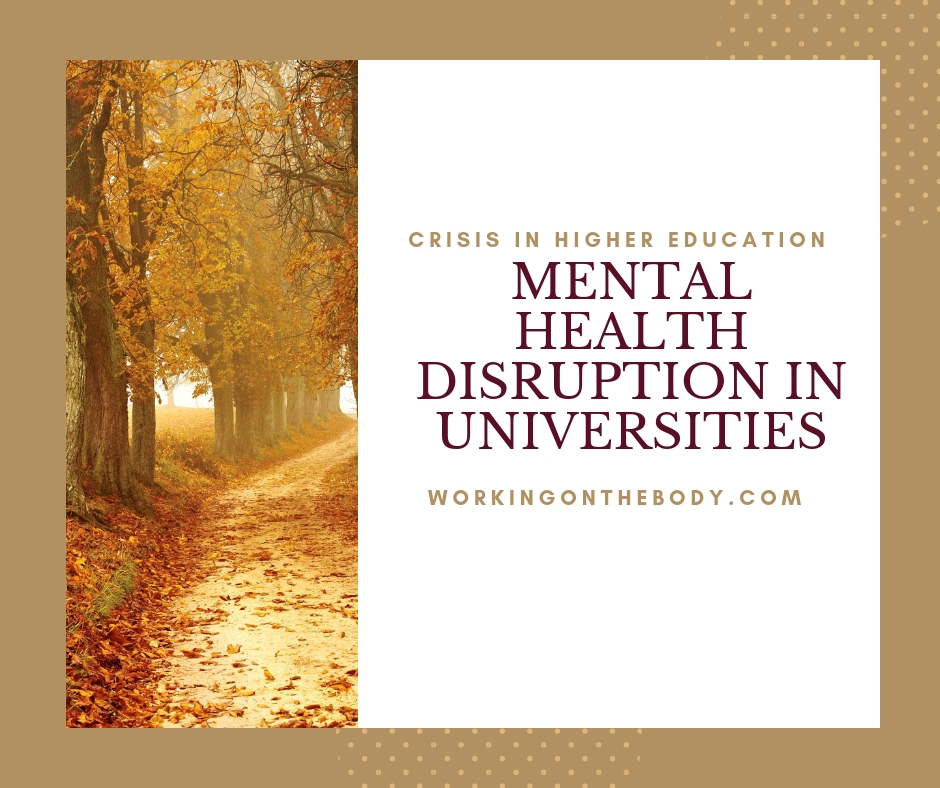 It was recently reported in the New York Times how freshman Harrison Fowler’s mental ill-health was handled at the prestigious Stanford University, one of the world’s leading teaching and research institutions in the US when he enrolled last year.

He took the decision to finally address the angst he had been struggling with for a long time. When he approached the on-campus mental health counselling centre he was advised to admit himself into a hospital which he agreed to do. From there, he was sent to a private outpatient treatment centre where he was prescribed an antidepressant that he said triggered suicidal fantasies.

Fowler’s mental ill-health meant it wasn’t long before he was back in the hospital, being urged to return home to Texas. 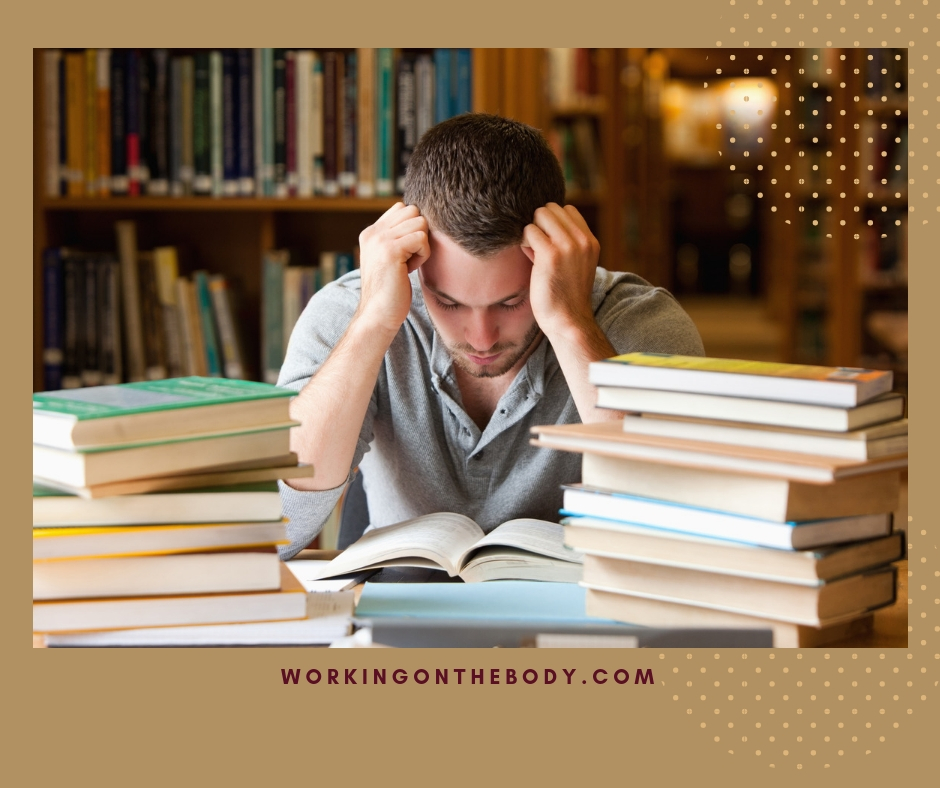 Fowler didn’t want to leave his studies and he blamed the decline in his mental health on the medication he had been prescribed. In the end, he had no choice to take a year off from his studies and he is now part of a class-action lawsuit accusing the university of discriminating against students with mental health issues by coercing them into taking a leave of absence, rather than trying to meet their needs on campus.

It is interesting to compare how UK universities compare with their treatment of undergraduate students presenting with mental health issues. Stories abound in the British press about underfunded and over-subscribed counselling services at prestigious universities where it can cost students as much as £22,200 per year to study.

Stanford University says it has behaved properly. But the case lays bare the conundrum universities face on both sides of the Atlantic with an international epidemic of students and young people dealing with depression, anxiety and suicidal thoughts — in responding to a broad array of mental health issues on campus.

It would seem that both American and the United Kingdom educational institutions make the same or similar mistakes. Both are accused of not intervening soon enough even when alerted of concerns by fellow students; waiting too long to notify parents when students are in trouble, or not notifying them at all. Others condemn institutions for writing off students too quickly to avoid lawsuits or bad publicity.

These problems are not going away any time soon. As it stands only half of the young college students in the US who are experiencing a mental health crisis seek official help largely due to the justified fear of stigma and negative consequences. It was reported that too often, universities respond to disability-related behaviour with exclusion, blame and draconian measures such as a forced leave of absence.

America is a more litigious society than the UK and the class action lawsuit against Stanford is the latest in a series of challenges to mental health leave policies, at prestigious institutions such as Princeton, Hunter College, Western Michigan University, and George Washington University. 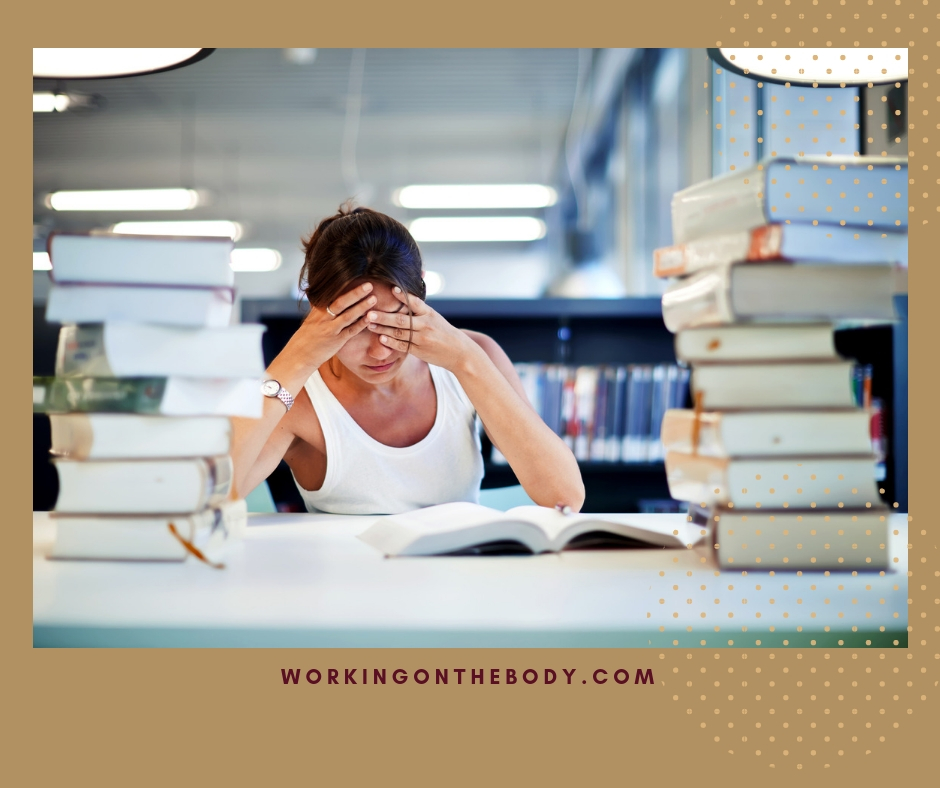 Stanford’s own website says that a leave of absence may be encouraged or required for a student whose psychiatric, psychological or medical condition “jeopardises the life or safety of self or others, or whose actions significantly disrupt the activities of the university community.”

The cases before the court describe when one student who had an anxiety attack, another who was harming, and others who had suicidal thoughts or who had tried to kill themselves. Quoting the legal experts they say that under federal regulations, it is clear that students can be barred from campus if they pose a threat to others. However, there is less clarity if they pose a threat to themselves and not others.

“The law is unsettled,” said Karen Bower, a lawyer who has represented students suing universities for making them take mental health leaves. “‘Disruption’ is the new buzzword. Universities have claimed that students who use too many resources, inform friends of suicidal ideation or require wellness checks have all disrupted the campus or campus operations.”

The Stanford lawsuit says that students who were placed on leave were effectively banished from the university and stripped of their privacy and autonomy. Their own doctors were second-guessed by the university’s, the lawsuit says, and the students were required to immediately withdraw from all classes, programs and housing. To return to campus, they had to write personal statements “accepting blame” for their behaviour.

In the UK the number of students who disclosed a mental health condition almost doubled between 2012 and 2015 to nearly 45,000, according to the Higher Education Statistics Agency. In 2015 alone, a record 2,050 students with mental health problems dropped out of university. The number of suicides among full-time students in England and Wales has also tragically jumped – from 75 in 2007 to 134 in 2015.

Universities UK, the trade body for UK Universities has recently published new guidance to improve the link between the NHS and care provision at university, admitting that students moving from home to campus “may slip through the gaps in the health system, when they are most vulnerable”.
Unfortunately, gaps in the NHS health system, especially mental health are endemic across the whole country and students are at risk as much as any others sector of society.

While most universities now offer counselling support and train teaching and some auxiliary staff to spot signs of mental illness and have complex care packages in place, not all provide the same level of support. It’s worth would-be students taking a detailed look at what’s on offer.

University league tables do not as yet include a chart to measure pastoral services on offer but now that potential undergraduates are paying consumers they may be able to effect improvements in services or spend their education pound elsewhere else.

If you are struggling with mental health issues while at university or worried about a fellow student make sure you are as pro-active as possible to get the support you, or they need. If this resonates with you please make contact and book a discovery call with me to better explore your options to transform your mental well-being by resolving the issues that are blocking your abilities to succeed. 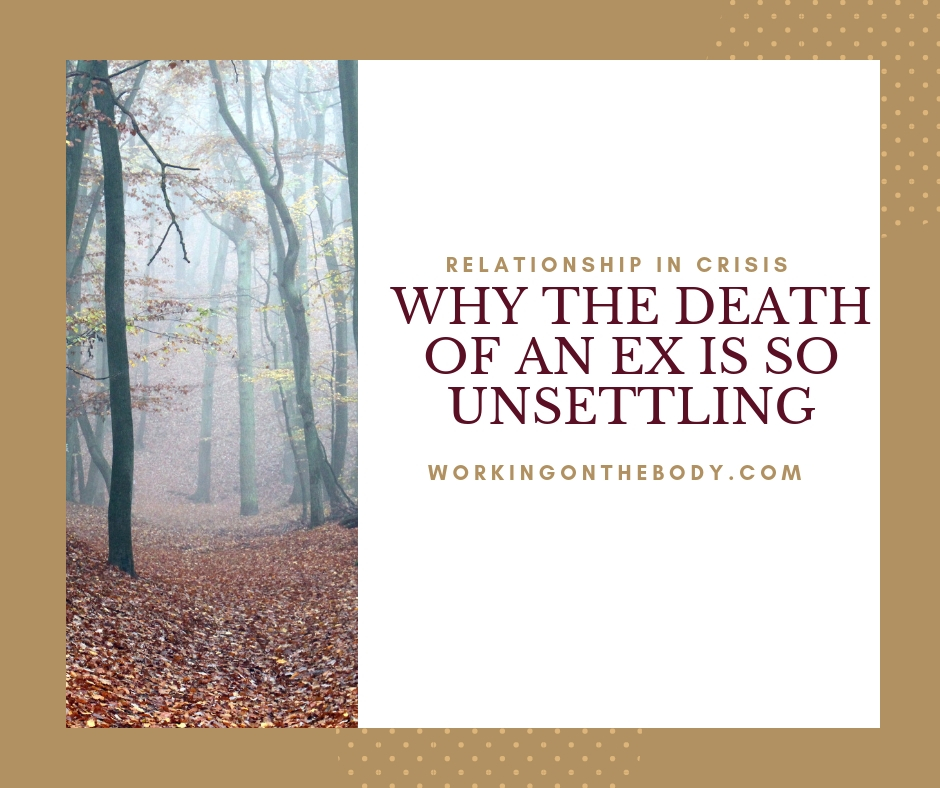 Sally Baker was recently interviewed by journalist Liz Connor about how the death of an ex-partner or spouse can negatively impact your current relationship. The press interest was sparked by the recent news of the broken engagement between US singer Ariana Grande and comedian and actor Pete Davidson following the death of her ex-partner rapper, Mac Miller.

Grief can take us by surprise so even when you are very content with your current relationship you can feel blind-sided and distressed by the death of someone from your past who was once important to you.

How does grief affect your relationship?
Everyone handles grief differently but what always happens is that a loss, even of an ex-partner, can cause an upheaval of emotions. Situations and relationships that were left permanently in the past can be suddenly brought into sharp focus by the death of an ex-partner. 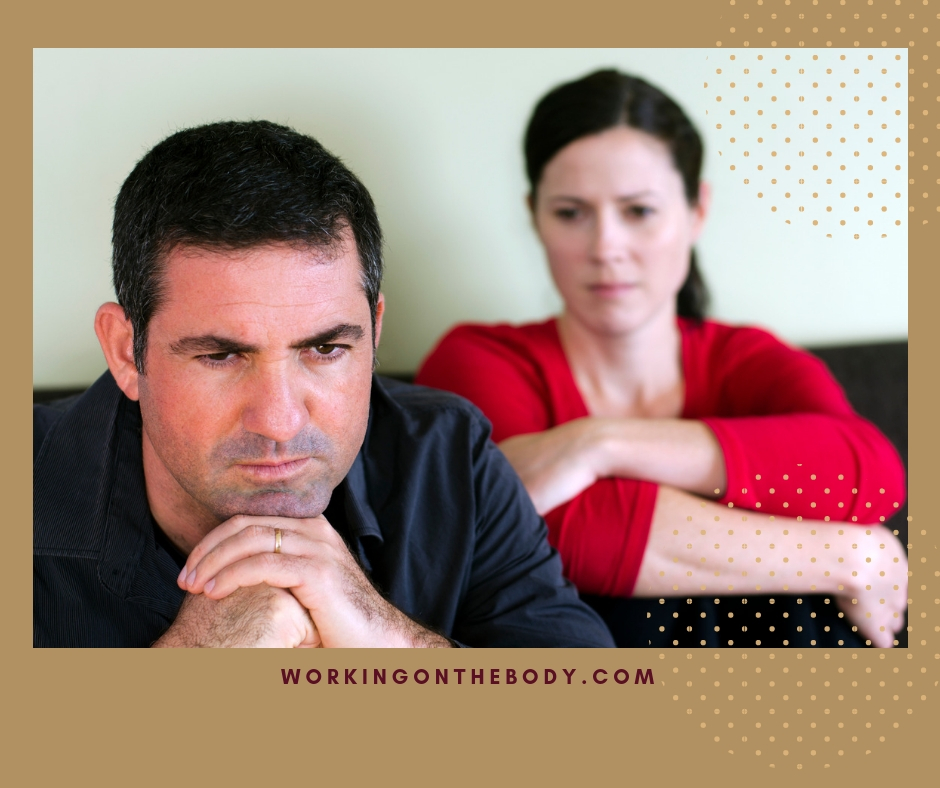 When one partner is mourning the death of someone for whom they’d had feelings for in the past any unresolved issues or insecurities in their current relationship can come under more pressure.

If the relationship is strong, with good clear communication between them then ideally a person will be able to mourn the loss of an ex and have their feelings acknowledged and respected without their current partner feeling threatened by their obvious sadness and grief.

When someone is experiencing the death of an ex-spouse their emotional response can be complex and contradictory. They may feel surprised by the intensity of the sadness they feel for the loss of someone whom in reality treated them badly or let them down. They are an ex for a reason but empathy, care and even love for past partners isn’t linear and doesn’t stop entirely when the relationship is over.

The more loving, open and in touch with their authentic emotions a person is then the more likely they are to be open to experiencing sadness and grief for an ex-partner or ex-spouse.

However, a current partner can be impatient with their feelings of grief for an ex-spouse and feel their grief is not permissible or is even inappropriate. The person mourning their ex will soon learn to hide their emotions so as not to upset their current partner or family.

With their grief pushed down they will often feel unsupported, and their sadness can take longer to process and release than it would have in a more supportive environment. Not having their feelings respected sows seeds of doubt too that they are in the right relationship for them after all and this will weaken their current relationship.

How can you stay connected as a couple during grief?
It is possible to stay connected as a couple during grief and allowing your partner to mourn for an ex-spouse is to show the strength of the current relationship. Grief isn’t logical and as well as mourning the loss of an ex a person is also mourning the loss of that particular time in their life and everything that episode conjures up for them.

Experiencing feelings of grief for a past partner isn’t a measure of commitment to their current relationship either, but it can be a test of a relationship. 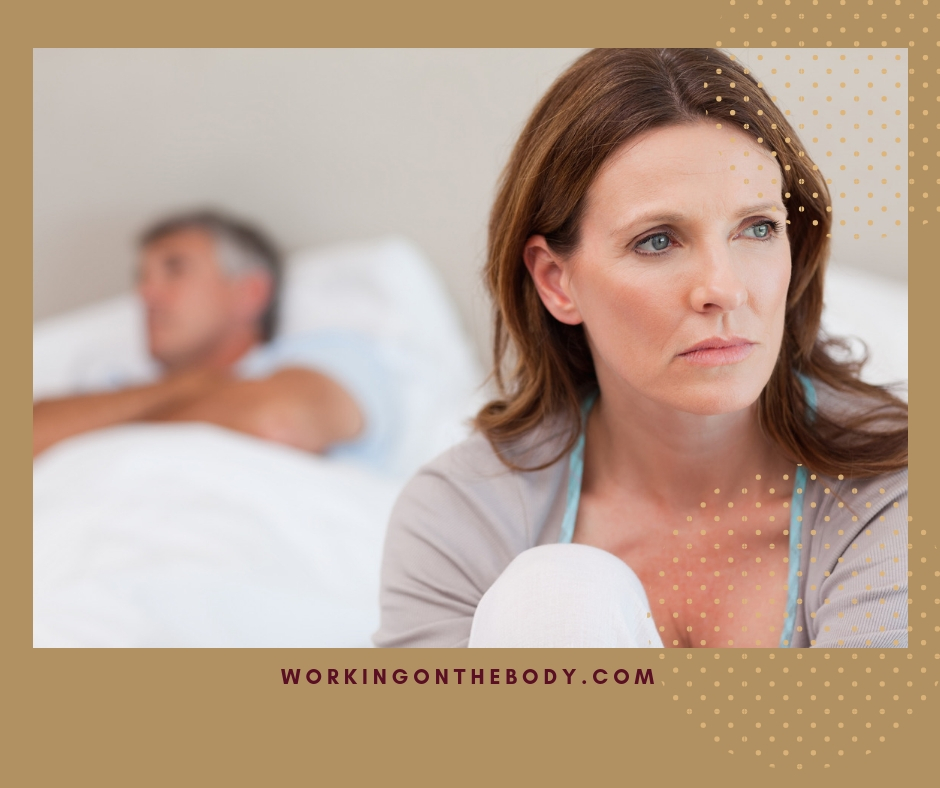 It’s important to make it clear to a partner experiencing the death of an ex that their sadness is valid and its okay for them not to be okay.

The whole experience can improve a couple’s bonding, help build better communication and connection and prove to both partners in their current relationship that they are resilient enough to cope with painful emotions and that they can still hold together.

If you are struggling with the emotional fallout from a loss or experiencing grief then reach out and connect. Grief doesn’t just happen when someone dies. When faced with chronic disease or a serious diagnosis we can feel grief for who we were or how we previously thought and felt about ourselves. Make that call. The link is on this page.

Do you suffer from self-doubt and imposter syndrome anxiety?

Click the button below to find out how to get an e-book that explains how to erase these feelings.

Show Me how!
x

Thank you for subscribing! Now click the button below to download your self-doubt and imposter syndrome anxiety e-book.

Sign up below to get your self-doubt and imposter syndrome anxiety e-book.