Bosses: Are drug users in your workplace? 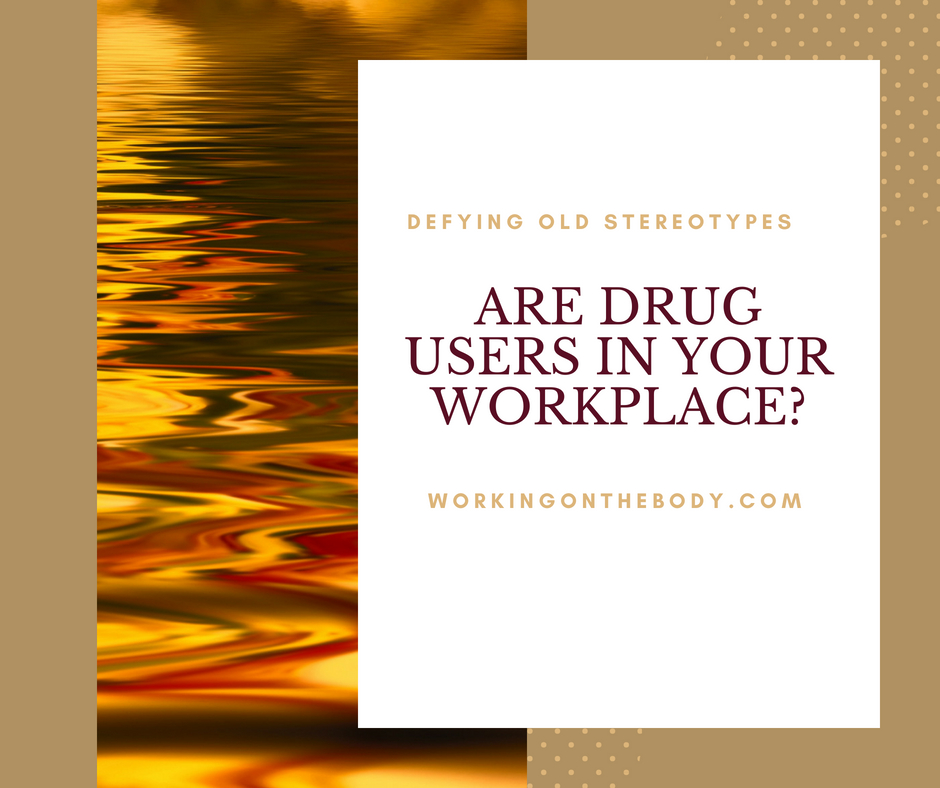 Are drug users in your workplace?

It is no surprise that a recent report by a US federal government agency acknowledged that some 69 per cent of illicit drug users in the United States is in employment.

As a London based therapist often the clients who come to see me for help with their addiction problems are high-earning, high achieving, high functioning alcoholics or Class A drug dependents although of course, they would never describe themselves in this way.

The metropolitan professionals I see are mainly, although not exclusively men and they often normalise their recreational drug and drink consumption either in secret or in the carefully chosen company of friends or work colleagues who pretty much share their habits.

What they come to see me for as a therapist it is to cure them of their unexplained panic attacks; alarming bouts of paranoia or to relieve their symptoms of anxiety.

Alternatively, they may come to see me about how insomnia is ruining their life. Or perhaps how their violent outbursts of rage with their partner leave them feeling shaken. They are often overwhelmed by the emotional fallout from their extreme mood-swings ruining their relationship and yet at a loss to know where all their anger came from.

It only takes a few open questions to find out about their usual levels of drinking and drug use.

It is often initially described to me as occasional; recreational; just weekends. Then after a few more questions, it becomes apparent that it’s almost every, if not every weekend and that the weekend often begins on a Thursday night and can run through to a Tuesday.  In therapy, clients although initially resistant, begin to acknowledge the elephant in the room and see the correlation between their addictive behaviour and its impact on their mental well-being as well as the detrimental effect it is having on their private life.
However, it is not just out of hours of behaviour that can be compromised by their drug use. It impacts on how they are at work too and if you are an employer and you have reason to suspect that drug use is affecting an employee’s performance and/or relations with co-workers, here’s some guidance on what to do

1. Don’t ignore the signs.
Obviously, if an employee has dilated pupils, slurred speech, or an unsteady walk, or if he or she smells of alcohol, you have every reason to suspect that person is having a problem. But you should also be on the alert for more frequent absences, especially with suspicious excuses, deteriorating relationships with co-workers, inattentiveness, taking longer to complete tasks or alternating between completing tasks quickly or slowly, evading responsibility for errors, and decreased attention to grooming or hygiene.

2. Make sure you know the law.
If you believe an employee may be suffering from a drug or alcohol problem that is affecting his or her work, don’t wait for it go away. Plan to sit down in private with the employee to address the problem. Before your meeting, make sure to review your legal rights and obligations to your employee.

3. Don’t assume that you know what’s truly going on–or that your employee will tell you.
Years ago, in what seems like another life now, I led a sales team. They were all younger than me and exuberant and high energy most of the time. They worked hard and as well as working together they often partied together at the weekends. I began to notice a pattern of behaviour with them collectively. Monday’s would be a slow day with a hung-over quietness amongst the team. There would be fewer calls made to sales prospects and plenty of staring vacantly into space and cigarette breaks. Regular Monday morning’s hang-over city is probably pretty common when you employ lots of young single extroverts enjoying their life in the capital and they needed lost of rallying and prompting to get through their work.

Nothing compared to the mayhem of Tuesday’s though. The team members were often agitated and argumentative with each other and worse with me. They could even be short with prospective customers on the telephone or inept at following up ‘warm calls’ that could lead to sales. Some members of the sale’s team were particularly difficult and unreasonable – but only on a Tuesday!

I couldn’t work out why this was happening and did some research to find that use of Class-A drugs such as cocaine and ecstasy cause this Tuesday mood change as people’s bodies go through the effects of a physical withdrawal from their weekend drug use.
I had to work to resolve this by focussing purely on the performance results of the team. Eventually, I promoted the worst offender to head up the team and made his pay bonuses dependent on the results the team achieved collectively. This proved to be the only way for a culture change to take place and with the insider knowledge he had of his team members he was able to make them behave more responsibly, motivated as he was by his own pay-cheque.

4. Steer the employee toward professional help.
Whatever you do, don’t try to counsel the employee yourself, or organise an in-office intervention. Your employee needs help from a trained professional, not a boss or friend, however well-meaning. If your company has an employee assistance program, you should point the employee in that direction. If not, come to the meeting prepared with brochures and phone numbers for local organisations that can provide help along with information about services your company’s insurance will cover, if any.

5. Don’t cover for the employee.
If an employee is failing to complete assigned work due to a suspected substance abuse problem, you may be tempted to lend a helping hand by finishing up some tasks yourself or re-assigning work to someone else. While you need to make sure that the work gets done, make sure to document any instances where you or someone else has to complete tasks that were the employee’s responsibility. Don’t try to save the employee from embarrassment by making excuses when he or she misses a meeting or deadline.

Your employee’s sub-standard performance should have consequences, so a record of these incidents will be a valuable tool to either compel the employee to face up to the problem or provide cause for discipline or termination if that becomes necessary. But more to the point, if you care about your employee, know that you aren’t helping him or her by providing cover — you’re enabling the substance abuse to continue. In the long run, that will only make things worse, for yourself, your employee’s co-workers, and your company.
(Some points of this guidance were first published by www.inc.com)

If you recognise that your own drug or alcohol use is getting out of control or already has impacted on your relationships and work then reach out now and make an obligation free call via the link on the page.