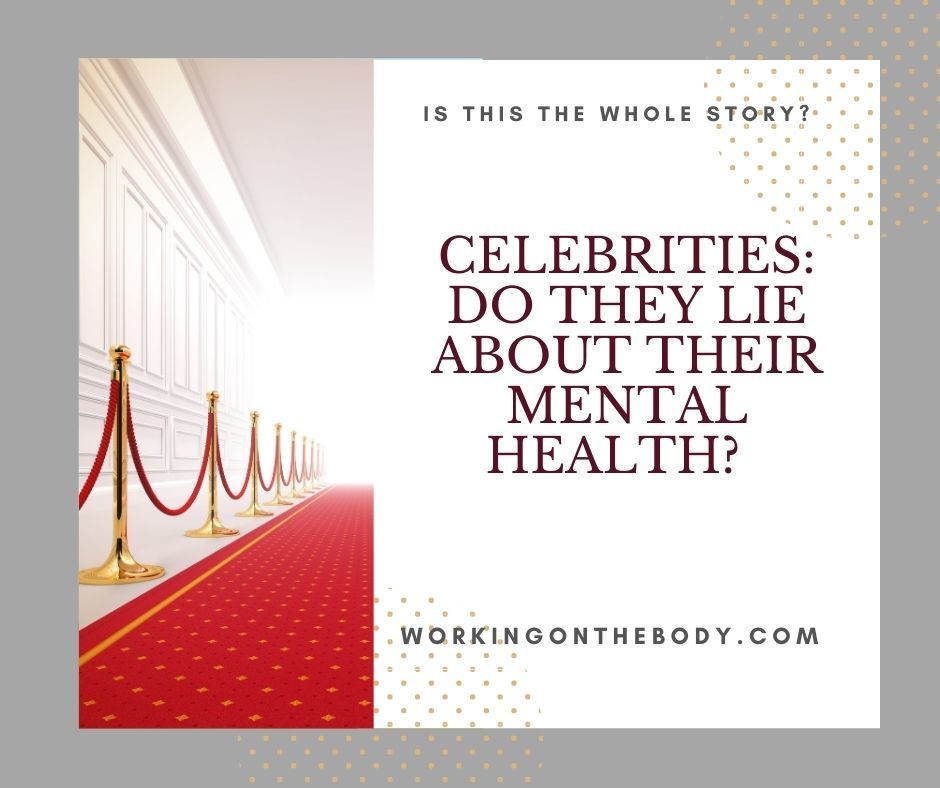 Mel C of Spice Girls fame is the latest celebrity to come out and speak about her struggles with anorexia and bulimia. She also said her anxiety and depression sadly over-shadowed her time in the international limelight as part of one of the most successful girl groups of all time.

On both sides of the Atlantic, celebrities talking in the media about their mental health challenges has become a ‘ting. We are now used to actors, performers and media personalities telling us in detail on talk shows, media interviews and in their biographies about their depression, their anxiety or their mental health diagnosis. Celebrities have even shared details of their psychotic episodes, their nervous break-downs and their suicidal thoughts.

It’s not unusual for a celeb’s PR team to announce that they are about to drop off the radar for a few weeks while they enter a residential wellness facility, or less coyly, to spend time in rehab.

In a bygone age, an ‘A’ list star’s agent or their film studio would have embargoed the press and imposed a media blackout to protect the investment in their talent by keeping their reputation intact. Everything was kept under wraps including sexual orientation, predilections and addictions as well as if they were struggling with any mental health issues.

Instead, a story might have been leaked to the press to explain a star’s absence was due to them taking a well-earned break from filming or a star’s desire to spend more time with their family.

There are no secrets any more

In our ultra-connected world gossip prevails above all else and it’s almost impossible for someone in the public eye to keep secrets. The mental health status of our celebrities has almost become part of their schtick either as a topic of conversation or as a way to prove they have skin in the game when creating complex characterisations who have their mental challenges. Today a celeb talking about their mental health is almost an expected part of the career arc of a famous person and no-one is the slightest bit surprised.

American actor, writer, director, and producer Lena Dunham has talked openly about her mental health. challenges. When creating her HBO television series ‘Girls’ she used her experience of living with Obsessional Compulsive Disorder (OCD) to make her character Hannah as authentic as possible.

Jason Katimes, the creator of another popular NBC TV show ‘Parenthood’ used his experience of raising a child with Aspergers to inform his work.

On the surface, you might think this trend of disclosure by famous people would help remove the stigma of mental illness for ordinary mortals, but it’s not quite that straight-forward.

Celebrities speak about their past mental illness

Celebrities who speak out about their mental illness tend to refer to past experiences so that they can assure everyone that even if they had a mental illness it was in the past. That was then, and this is now and look at them now they’re fine!

Country singer and actor Demi Lovato has spoken about living with Bipolar Disorder and the self-destructive behaviour this can cause. She has made headlines in recent years due to relapses and her times in rehab. She is one of the few celebrities to acknowledge her ongoing struggle with mental illness.

She has publicly used her experiences to expand the dialogue around mental illness but has recently made it clear she wants to make the conversation less about her and she wants to elevate the stories of others instead. The inference being that she’s moving on.

For some celebrities, mental illness is an event

Model and TV personality Chrissy Teigen kept secret her post-partum depression following the birth of her daughter Luna in 2016. She’s quoted as saying a sense of shame stopped her from talking about that time in her life until almost a year later. When she did talk about her experience, she was able to departmentalise her period of mental illness into a cause and effect scenario.

Chrissy Teigen went viral again on social media in October 2020 sharing her trauma and immense heartache with the miscarriage she suffered with her husband, John Legend. Teigen spoke openly about the heartbreaking loss of her child, whom they had named Jack.

For some celebrities, mental illness is a phase

Prince Harry often refers to a two year period in his early twenties when his life was in chaos and hints at the depths of his emotional breakdown. He says he is now in a good place mentally even with the latest schism with his extended Royal Family. Recently he and his wife Meghan shared their grief with the world with the sad news that they had miscarried their second child. By sharing news of their loss, celebrities send us a message that there is no shame attached to emotional collapse, huge distress and mental ill-health when it is linked to a traumatic event.

The Rock, is an American actor, producer, and semi-retired professional wrestler refers to three distinct past periods of depression in his life. Speaking out now as he recalls his mental ill health he assures everyone it’s behind him and he has beaten depression for good.

Model and actor Cara Delevingne talked about how her teenage years were blighted with depression to emphasis and let us know that she’s talking past tense too. She uses a specific timeframe to departmentalise her mental illness to a specific phase in her life.

Do celebrities tell us the whole truth?

When you unpick what the majorities of celebrities say about their experiences of mental illness the public are being fed yet another glitzy fantasy. We might think celebs are leading the way to greater transparency about mental illness when in fact that’s barely ever the case. Read between the lines or listen closely and celebrities mostly only disclose their mental health challenges when they are over or they attach their mental health ‘wobble’ to a specific event or period in their life.

We need to remember that for most celebrities their ability to work is dependent on producers raising finance on their reputations for projects that can take several years to come to fruition. A celebrity admitting they have ongoing mental health concerns, even one managed with medication or with therapy can make them seem far less bankable when compared to other would-be’s and wannabe’s who have kept quiet.

Mel C credited the reason her forties are happier and more balanced than her twenties is because of the work she has done in therapy to explore and change the way she thinks and feels about herself. It’s positive to see examples of people in the public eye that shows mental health can improve so that anxiety and depression do not have to be the uninvited spectre ruining every day.

However, for most people, whether famous or not, mental health exists on an ever-changing spectrum that shifts and changes for the rest of our lives. It’s an unhelpful over-simplification when celebrities famously tell the lie about their mental illness, ‘oh yeah that happened in the past but now I’m fine.”

Is your mental health fine or thriving?

Remember, whenever anyone tells you they are ‘fine’ or you hear yourself side-stepping how you authentically feel by uttering that four-letter word that there is most likely a hell of a lot more going on than you’re hearing or willing to admit. After all, “FINE” is the title of a song performed by hard rock band Aerosmith. The song was written by lead singer Steven Tyler and lead guitarist Joe Perry. The song’s title “FINE” is an acronym for “Fucked Up, Insecure, Neurotic, and Emotional”, as stated in the album’s liner notes.

If you are tired of telling everyone you are fine when you don’t feel fine, or you struggle with your mental health and feel ready to find out how it would be to think and feel differently about yourself then book an obligation free call with me via the link on this page.