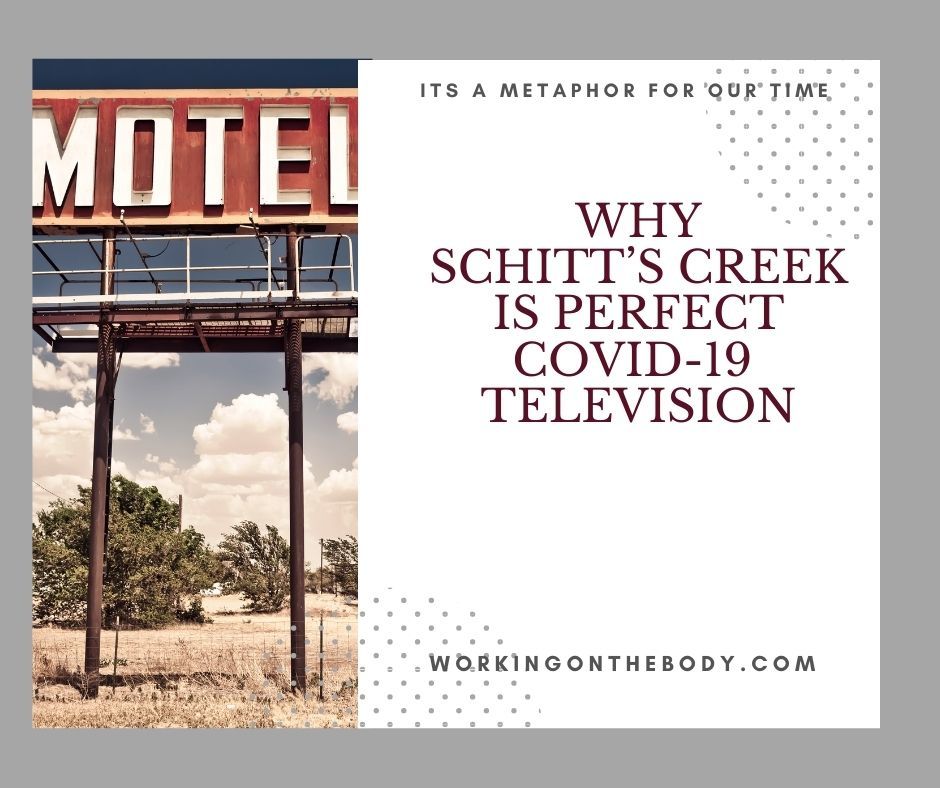 I’ve watched Schitt’s Creek on Netflix twice now in its entirety. This takes even my ability to procrastinate to a whole new level but there is something very special about this Canadian TV series. The record-breaking Emmy Award-winning comedy has become my go-to happy place during these strange, uncertain times.

As an expert in human behaviour, this programme provides a rich seam of observations of human nature that is even more pertinent living as we do in the time of virus.

If you don’t know the story it is about the affluent Rose family who loses all their money and trappings of wealth due to the financial shenanigans of patriarch Johnny Rose’s business partner. Everything the family own is confiscated in a dawn raid by the IRS (Internal Revenue Service). After the shock eviction from their opulent home Johnny and his wife Moira along with their two pampered grown-up children, David and Alexis, are left with only the possessions they can hurriedly pack.

Fishes out of water

Now homeless Johnny is reminded about a town vaguely referred to as located ‘in the middle of nowhere’ called Schill’s Creek that he bought as a joke for his son David a few years before.  The narrative of the six seasons follows the Rose family as they adjust from living a life of entitlement and privilege to rebuilding their lives in a state of near poverty. They move to the town immortalised in the show’s title and set up home in adjoining rooms in a down-at-heel roadside motel.

Sympathy for the rich, even when on their uppers, wouldn’t on its own be enough to make anyone care about the Rose family. In our late-capitalist world people who flaunt their wealth ostentatiously like the Roses’ did are mostly ridiculed and discredited. It is true that initially, the family all come across as pretty unlikeable. Even in their reduced circumstances, their sense of privilege permeates everything they do and say in their new home town.

We get to see over the first couple of series how the low-key, mostly kind interactions of the local townspeople towards the blow-ins chips away at the Rose’s cynical, cosmopolitan veneer. The Roses’ have no choice but to recalibrate who they think they are when the folk from Schitt’s Creek accepting them without any of their trappings of wealth. All that is left of their old life-style is Moira’s ever-changing haute couture monochrome outfits and her idiosyncratic wig collection.

Lean in and grow to love them

The six series of Schitt’s Creek amounts in all to some eighty episodes and, given the inspired writing and solid, credible characterisations, is long enough for us to lean in and care about what happens to the Rose family. The premise of the programme is that their lives changed beyond all recognition. This is a metaphor in some ways as to how many of our lives have changed as we live through the restrictions of a pandemic.

The show’s creator Daniel Levy plays David an ex-NYC gallery owner and pan-sexual son. No one is more taken aback than he is when he breaks his previous relationship record of four months. He finds lasting love with his previously straight-identifying business partner Patrick. In the process, David shifts from being arch, cynical and emotionally closed down to form for the first time a deep, meaningful friendship with motel owner Stevie and maintaining a loving, playful and caring gay relationship. David’s scenic route to happiness feels relatable. He allows his once impervious, metropolitan, brittle facade to be gently demolished by the love and attention he lets himself receive. In turn, he gradually opens his real self up more to his parents, sister and the community and family he becomes committed to.

Family is more than your birth family

David’s sister Alexis undergoes a powerful transformation in Schitt’s Creek’s narrative from a selfish and shallow socialite to an insightful and empathetic human being. She finds and loses love and in the process discovers for the first time a deeper and more authentic connection with herself. Her storyline is left the most open as the series finishes. She’s leaving town on her own to go to New York as an ambitious, capable and resourceful young woman. Her character is informed through connection to her emotional core of knowing and valuing her abilities and who she is. That is surely the lodestar of what we would all wish for ourselves.

Moira and Johnny’s marriage had always been close but somewhat distracted and superficial. Their children had been raised by paid staff in another wing of their mansion. In contrast, their close proximity of sharing lodgings at the motel had brought them into more contact with their offspring than ever before. At first, it was as if the family only had the most glancing knowledge of each other. At the heart of the Schitt’s Creeks story is how a family, stripped of all their worldly distractions found themselves coming together and sharing a love for each other. It’s a story as old as time itself.

During the unsettling fallout of living in the time of virus, it feels comforting to spend time in make-believe escapism with characters discovering for themselves the benefits of living a simpler life. Just as our real lives have become stripped down and made simpler, Schitt’s Creek’s heartwarming theme is how family, friendship, love and connection matter more than material wealth. It could sound hackneyed except the characters portray their circumstances with a healthy mix of cynicism and wide-eyed astonishment as to where they have found themselves.

Sister from another mother

There are additional layers of connection within the cast of the show too that emphasises the curative and healing value of human connection. Daniel Levy is the real-life son of Eugene Levy who plays his father Johnny in the series. Daniel’s sister Sarah Levy plays Twy who runs the towns only cafe and a key location for many of the celebrations and more poignant moments of the story. The Levy trio have talked movingly about their gratitude for having had this opportunity over six years to work together and spend time with each other. They have also spoken frequently how other cast members, in particular, Annie Murphy who plays Alexis and Emily Hampshire cast as Stevie grew to feel as precious to them as blood-born family. It feels particularly crucial to acknowledge the importance of ‘found’ family when not everyone’s birth family are able or willing to step up to be who we need or want them to be.

During Schitt’s Creek ‘Holiday Spectacular’ which is the last episode of Season Four, Moira said to Johnny that one good thing that has come out of living in this lonely desolate place is that it is peaceful. I find peace and respite from all the stress and confusion of the pandemic by watching the wonderful Schitt’s Creek.

Hope you enjoyed reading my Schitt’s Creek fan-post. Think of ways you can find peace for yourself during these challenging times and if you’re struggling then reach out to your friends or family do seek professional help. Human connection is what we all hunger for so do your damnedest to allow this for yourself.