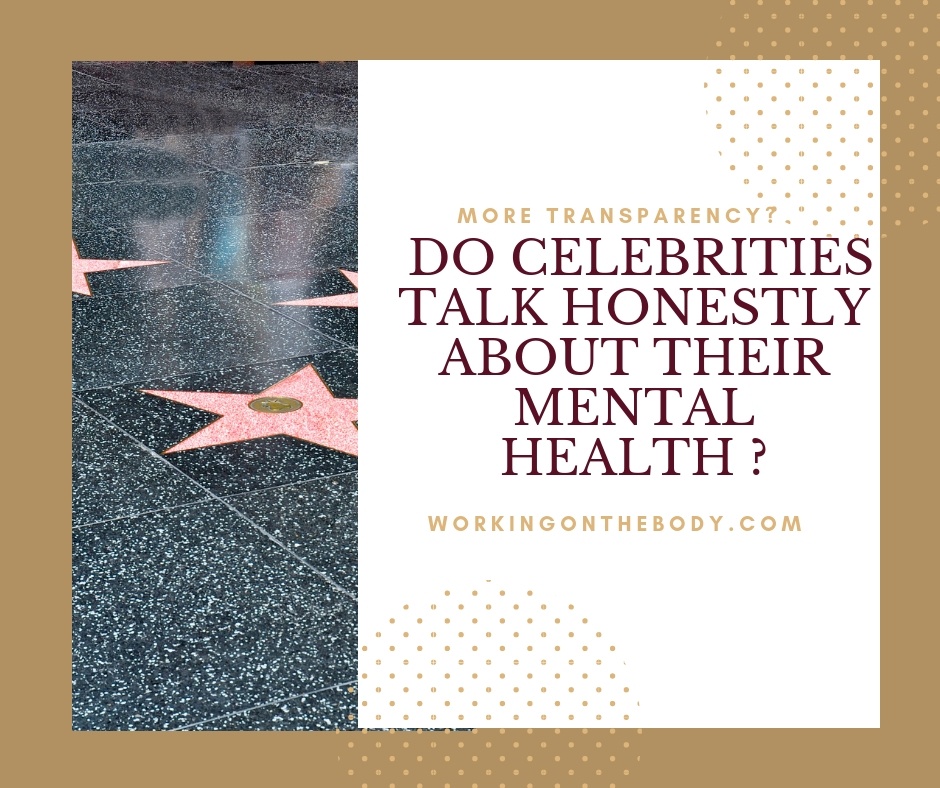 On both sides of the Atlantic, celebrities have been invited onto chat shows or are seen talking in the media about their mental health challenges.

We are now used to actors, performers and media personalities telling us in detail about their depression, their anxiety or their mental health diagnosis. Celebrities have even shared details of their psychotic episodes, their nervous break-downs and their suicidal thoughts.

It’s not unusual for a star’s PR team to announce that they are about to drop off the radar for a few weeks while they enter a residential wellness facility, or less coyly, spend time in rehab.

In bygone days an ‘A’ list star’s agent or their film studio would have influenced the press to impose a media blackout to protect the investment in their talent by keeping their reputation intact. Everything was kept under wraps including sexual orientation, predilections and addictions as well as if they were struggling with any mental health issues.

Instead, a story might have been leaked to the press to explain a star’s absence was due to them taking a break from filming or a desire to spend more time with their family.

In our ultra-connected world gossip prevails above all else and it’s almost impossible for someone in the public eye to keep secrets. Their mental health status has almost become part of a celebrity’s schtick either as a topic of conversation or as a way to prove they have skin in the game when creating characters who have their mental challenges.

American actor, writer, director, and producer, Lena Dunham has talked openly about her mental health. When creating her HBO television series ‘Girls’ she used her experience of living with Obsessional Compulsive Disorder (OCD) to make her character Hannah as authentic as possible.

Jason Katimes, the creator of another popular NBC TV show ‘Parenthood’ used his experience of raising a child with Aspergers to inform his work.

As well as using mental health to inform their writing,  it might be thought that this trend of disclosure by famous people would help destigmatise mental ill health for ordinary mortals but it’s not quite that straight-forward.

Celebrities talk about the past, not the present

Celebrities who speak out about mental illness tend to refer to past experiences so that they can assure everyone that even if they had a mental illness in the past that was then, and this is now and they’re fine.

Country singer and actor Demi Lovato has spoken about living with Bipolar Disorder and the self-destructive behaviour this can cause.  She has made headlines in recent years due to relapses and times in rehab and she is one of the few celebrities to acknowledge her ongoing struggle with mental illness.

She has publicly used her experiences to expand the dialogue around mental illness but has recently made it clear she wants to make the dialogue less about her and wants to elevate the stories of others with the inference being that she’s moving on.

Model and TV personality Chrissy Teigen kept secret her postpartum depression following the birth of her daughter Luna. A sense of shame had stopped her from talking about that time until almost a year later. When she did talk about her experience she was able to departmentalise her illness into a cause and effect scenario with no relevance to the rest of her life.

Departmentalising mental illness is another common way that celebrities talk about their mental health.

Prince Harry along with other members of the Royal family have launched a mental health charity called ‘Heads Together’ has spoken about his mental health.

Now in his thirties, he refers to a two year period in his early twenties when his life was in total chaos. He says he is now in a good place.

The Rock, is an American actor, producer, and semi-retired professional wrestler refers to three periods of depression in his life. Speaking out now as he recalls his mental ill health he assures everyone he has beaten depression for good.

Model and actor Cara Delevingne now talks about how her teenage years were blighted with depression to let us know that she’s talking past tense and this time departmentalising her mental illness to a specific phase in her life too.

With celebrities, complete honesty is still hard to find

For celebrities, the shame still exists and the risk of being seen as vulnerable to mental illness is still great. Future work for most is dependent on producers raising finance on their backs for projects that can take several years to come to market. Admitting they have ongoing mental health concerns, even one managed with medication or life strategies can make them seem far less bankable when compared t others who have kept quiet.

We are still a long way from acknowledging that for most of us, whether famous or not, mental health exists on a spectrum that can change both throughout the day, and every day for the rest of our lives.