Why are survivors of sexual abuse not believed? 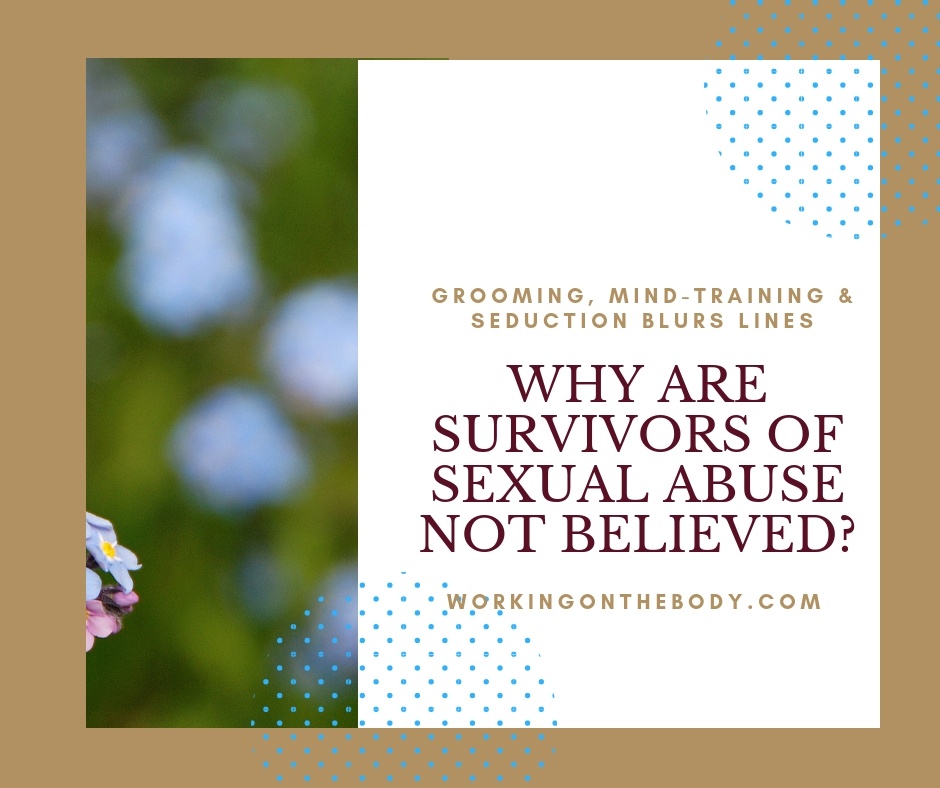 Oprah Winfrey, herself a survivor of childhood sexual abuse, has spent time with both men. She supports their story finding what they have said both convincing and credible.

Meanwhile, the judiciary, Jackson’s estate and his loyal fan base call them discredited at best and liars at worst. Certainly, in the past, both Robson and Safechuck had testified under oath that they were not sexually abused by Jackson.

Now in this latest documentary based on events of over twenty years ago alleging that Jackson did abuse them from when they were respectively seven and ten years of age.

The reality for many children who are sexually abused is that what they experienced was not violent or traumatic at the time. Sexual abuse of a minor is always a crime, but sex with a minor doesn’t always involve force.

Sexual abuse of a minor is more likely to be played out as a calculating process of seduction, mind-training and grooming. This is designed to give the abuser prolonged access to the child with opportunities for abuse to take place.

What the sexual abuse of a minor inevitably does is to cheat a child out of the agency of their sexual awakening. Ideally, a child’s emerging sexuality is within their control and develops at the age, pace, and sexual orientation of their choice. When minors are introduced to sex by an adult, it is to always satisfy the adult’s sexual desire not those of the child.

For the abuser to succeed he or she will manipulate, lie, frighten or speak words of love. They will equally say and do whatever it takes to ensure the child’s complicit silence. The abuser can make the child believe they are unique, or that they are specially chosen, and that the sexual acts they share are a natural expression of their love for each other that outsiders could never understand.

Often the most insidious and enduring harm caused to a minor is the confusion the survivor of childhood sexual abuse feels about the role they played. A child can be manipulated to believe it was their fault the unlawful sex happened and that they were responsible through their actions or their behaviour.

The child can feel shame and guilt and make negative judgements about themselves that impact their mental well-being into adulthood. Feeling ambiguous about their abuse is especially true when the child experienced sexual pleasure with the abuser, and the role of sexual seduction can blur the line between what feels like right or wrong in the child’s eyes.

For some survivors of childhood sexual abuse, it can take years for them to realise their experience was abusive.

The power of sexual grooming is how secrecy is a crucial component. A child dependent upon or in the thrall of their abuser, or terrified of the consequences of telling their truth will live in daily fear, confusion and even dread. With limited life experiences to compare with and no opportunities to speak with anyone else, the child is left isolated and mute.

Part of the complexity of seductive sexual abuse is that it is not uncommon for a minor to lie or help cover their abusers’ tracks. An abused child might provide excuses and even alibis in court to protect their abuser. Lying can happen even when the child know it means the abuse they suffer will continue or that similar abuse will occur with another child.

Present day cases of abuse are hard enough to prosecute successfully, and legal cases remain rare with many survivors of abuse never having their day in court. Historical abuse is even harder to prove and in the instances Wade and Safechuck its distractors are saying these are uncorroborated allegations.

However in my work I believe the survivors because I’ve spent time with them to hear their story, and see their pain just as Oprah Winfrey has with these two men. Survivors do not lie.